The canon in the new millennium 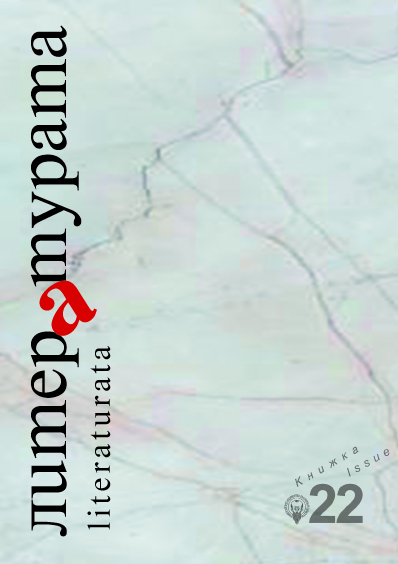 Dylan Suher. “... my Understanding of the Essence of LiteraryAnalysis Stems from... the Desire to Build a Communityand Follow an Ethic Goal”(An Interview with David Damrosch) (Transl. from Englishby Ruzha Muskurova) / 69

Ivan Ivanov. Wars for the Literary Canon in the Cultural Dynamicsof the New Century / 85

Cvetan Rakiovski. Universalism as Conformism in the Poetryof Dimitar Panteleev / 176

Evdokiya Borisova. Architectural Canon and Literary Canonor the War for a Fountain / 1958

Zdravko Lovchaliev. Via the Fictional World of Jordan Jovkov and George Raichev – Discrepancies and Resemblances. The Dimensions of Sin – Intertextual Analysis between the Short Story “Albena” and the Long Short Story “Sin” / 232

Kristina Koleva. A Look at the Literature from a Medical Point of View / 258

Requirements for Publications in the Journal “Literaturata” / 277

Canon or the classic refers to the best and most representative works in a literary or cultural tradition, and the rise of world literature now provides an opportunity for scholars of different literary traditions, particularly non-Western and the less well-known and insufficiently studied “minor” tradi­tions, to introduce and present the canonical works they know best to form a canon of world literatures. World literature is not just all the works that happen to circulate beyond their culture of origin, but the collective body of the best canonical works from various literary traditions that circulate to constitute what we call world literature.

Genre and the Literary Canon

This text examines the interplay between genres and literary canons, spell­ing out the important links between the two that make it possible for genres to emerge and fall out of favour. Genres are embedded in a socio-historical context, which allows the author to explore their interaction with said con­text. The text calls for ongoing reevaluation of the stances towards genres and canons alike and argues in favour of context-based non-homogenous criticism.

The Literary Canon as a Temporary Result of Intentional Play

The article is an attempt to apply the game theory of Roger Caillois and Umberto Eco’s theory of intention to an analysis of the phenomenon of the canonisation of literature. In the game of intention, the temporary result of which is the literary canon, significant limitations are intentiooperis and literature’s tendency towards classics. The canonisation of literature recalls a form of game which Roger Caillos defined as alea.

Keywords: the game theory of Roger Caillois, Umberto Eco’s theory of intention, the canonisation of literature

“... my Understanding of the Essence of LiteraryAnalysis Stems from... the Desire to Builda Community and Follow an Ethic Goal”

(An Interview with David Damrosch)

The work explores the intensification of debates about the literary canon in the new millennium, which continue the militant conflikts of previous decades in the new digital and commercial situation. The role of the reader is emphasized, which becomes an important factor in canon formation, and the canon remains subject to ideological and political clashes, part of the diversity and pluralism of the modern world. Concepts for the canon of theoreticians were used as Harold Bloom, Frank Kermode, John Guillory, Robert Alter, Dean Kolbas and others.

The Literary Canon – Lost and Found in Translation

The paper deals with the topic of canonicity and particularly canonicity in translation. In the first part of the text, the theory of Lawrence Venutti is introduced and analysed. In the second part, the author applies his theories to the works of Kiril Hristov (1875–1944), a Bulgarian poet and transla­tor, who lived in Czechoslovakia and translated works of Czech authors to Bulgarian. His anthology The Mirrors of Vltava (1946) is in the centre of interest and shows not only how canonisation in translation succeeds, but also how it fails.

Labyrinths of Normativity: the ProblematicRhetoric of “Dr. Krastev as a Literary Critic”by Simeon Radev

The article attempts to analyze and deconstruct the very famous inquiry of Simeon Radev in the context of Bulgarian cultural and literary debates at the beginning of the XX century. The aim is to show how Radev’s argu­mentation utilizes and affirms the same dogmatic language which he re­jects and thus to demonstrate the arbitrariness of the long lasting canonic image of Simeon Radev as a “liberator” of the Bulgarian literary field.

Universalism as Conformism in the Poetry of Dimitar Panteleev

The article explores the works of Bulgarian poet Dimitar Panteleev be­tween the two world wars. His poetry is plased ina comparative perspective against symbolism. The poetic language of the author can be placed in the field of the so-called plot lyrics.

Architectural Canon and Literary Canonor the War for a Fountain

This article discusses a curious plot about preserving and deviating from the norm for understanding the literary work. The subject of the study is the extensive inscription of a fountain of Mahmoud II’s epoch, which rose to the center of Varna in the first half of the 19th century and the interest­ing story about its demolition. The text of the inscription, which is a poem devoted to battle glory, is interpreted. This text is laid on the layers of the Bulgarian literary canon. The work is also related to the artifact of her “media” – the big marble fountain. Analogies have been made between the functioning of the canon in literature, music, architecture, and fine arts. The messages of the text are interpreted in synchronic and diachronic terms,in the order of aesthetic, poetic and socio-historical and ideological sug­gestion.

The Silence in Yordan Yovkov’s Work

The paper aims to present silence as one of the main topics in the complete literary works of Yordan Yovkov. For this purpose, a brief overview of the poetry of the writer will be made, placing him implicitly in the era of modern­ism. Consequently, an analysis of short story collections from different pe­riods, which aims to separate the distinct types of silence, will be presented. It will be based upon the studies of Simeon Sultanov and the theories of Maurice Maeterlinck. They could be divided in two groups – on one hand the silence as a conscious choice of the characters and as a way to protest against something, someone or even against themselves; and on the other hand, it can be a result of а collapse of the language, of the impossibility to make sense.

The present article is focused on the interpretation of ethical and scriptural problems such as sin, repentance, redemption in two representative liter­ary works for 1920s–1930s – “Albena” and “Sin”. These texts reproduce analogous plot situations of committed moral trespass (adultery), which is essential to be atoned for. The intertextual analysis is a peculiar attempt to find an answer to the question: Is it possible each type of sin to be forgiven and under what kind of circumstances? It appears that spiritual healing/ revitalization and human salvation from the darkness of sin are attainable only by steadfast, irrevocable faith of God, sincere repentance, desirable remission and deep anguish. When Belief in God is tragically lost, atone­ment could be achieved entirely in Death.