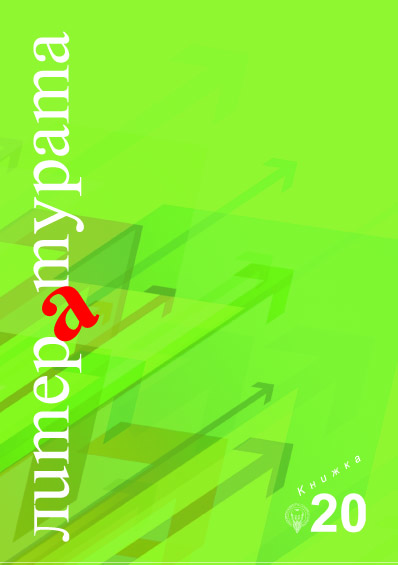 Ágota Kristóf, The Choice (transl. from French by Aleksandra Zheleva) / 77

Olga Demidova, Emigration as a Problem of the Philosophy of Culture (transl. from Russian by Rumyana Evtimova) / 84

Galina Petkova, Irina Belobrovtseva, Dialogues on the Russian Literature of the 20th Century (I. Metropolisand Emigration) / 144

Tanya Galcheva, Encyclopedia of Anti-Communism, A Wreath of the Most Malign, Disgusting, Wicked Treachery / 164

Martina Nedyalkova, The Model Of The Woman Object In The Cine-matographic And Literature Noir Genre / 183

Kostantin Adirkov, What Does Migrant Novel Do With Cultural Belonging? / 212

Vanesa Andonova, Enthusiasm and Threats in the Collection „Literature and Technique“ / 218

Gayatri Spivak argues that comparison assumes a level playing field and the field is never level, if only in terms of the interest implicit in the per­spective. It is, in other words, never a question of compare and contrast, but rather a matter of judging and choosing. She maintains that each literary tradition, tied to a dominant language group, confronts the narratives pro­duced by the Eurocentric history. In her opinion rethinking of comparativ­ism starts with the admission that as language, languages are equivalent, and that deep language learning must implode into a simulacrum of lingual memory. Spivak develops the idea that in the name of comparativism as equivalence, we should be prepared to undertake a serious and continu­ous undoing of nationalist or national language-based reading. She writes about comparativism in extremis and gives examples how it often makes visible the double bind between ethics and politics. The text states that in order to take the diversified subaltern or less-taught languages out of en­clavist or collectivist pedagogy and politics, and to save Comparative Lit­erature from unacknowledged and exclusivist comparison, structural and epistemological changes are required.

The concept of migrant literature appears in Quebec in the eighties. Mi­grant literature or migrant creation has passed through different phases of development, according to critics who focused on its history. Should we talk about a “migrant” or an “immigrant” works? Which are their most fre­quent topics and formal characterizations? Where do they stand in relation to the French literature?

In the entity called “World republic of the written word”, French language literatures have been defined consecutively as regional, peripheral or young. Still, if the first two definitions have some hierarchical connotation towards the literary creation in France, or towards any other form of cul­tural domination, considered as a mature one, the concept of young litera­ture is free of any depreciative meaning. It simply designates “the literature written by a minority in the majority’s language”.

This essay begins with a brief review of the “troubled history” of the com­parative method in anthropology in order to outline the various ways that the comparative method has been engaged within one discipline. Then it turns to a discussion of the importance of a comparative consciousness to the study of migration. Caroline Brettell argues that comparisons are es­sential if we are to avoid both national and temporal exceptionalism in our understanding of the causes and consequences of migration. She moves therefore from a theoretical and methodological approach formulated with­in a single discipline to its application in addressing an important problem in human experience that concerns scholars across a range of disciplines. Without comparative consciousness, differences are made more unique than they should be and similarities can be overstated.

Emigration as a Problem of the Philosophy of Culture

The article is devoted to the phenomenon of emigration treated in the per­spective of philosophy of culture and philosophical anthropology, with the new anthropological type homo emigranticus, its specific characteristics and identity forming mechanisms conditioned by emigre reality as the fo­cus of the author’s attention.

How do contemporary writers that we associate with the migrant wave in modern world literature write about the other? Why do they emphasize on the exotic? Do they believe in the possible encounter of cultures? These are only some of the questions this text attempts to answer, working on texts of authors as Sandra Cisneiros, Jhumpa Lahiri, Ornella Vorspi and Mohsin Hamid.

This article is devoted to the topic of exile brought about by totalitarian regimes and the choice of the writer to write in a foreign language. French-language writers from Central and Eastern Europe enrich Francophone literature and are part of the creators of literature – a world based on mul­tilingualism and multiple identity. The concepts of homeland, affiliation, mother tongue acquire new dimensions in the globalized world.

Mircea Eliade and the Border

The renowned historian of religions and writer Mircea Eliade remaineda­broad as an emigrant after the Second World War and the establishment of the Communist regime in Romania. This article traces the delayed and poor reception in his homeland during those years and compares it with his internationalprominence. It also looks at the contemporary editions of his academic works and his fiction, as well as their new interpretations, which no longer depend on borders.

Dialogues about Russian Literature in the Twentieth Century (I. Motherland and emigration)

This publication follows the model of the famous Jakobson – Pomorska Dialogues (1980) and offers G. Petkova’s interview with I. Belobrovtseva, Professor at the University of Tallinn, discussing the problems of Russian literature in the twentieth century through the prism of the emigration phe­nomenon. The conversation includes several research directions, separated into discrete rubrics, and touches upon the following topics: the philolo­gist’s biography and professional career; Yuri Lotman’s teaching activity and the history of the Tartu-Moscow Semiotic School; the study of Russian emigration centres in Bulgaria and Estonia after 1917; the literary genera­tions of the Russian emigration and the authors of the young or ‘unnoticed’ generation which created existentialism in Russian literature; the works of the émigré writer L. Zurov; ‘forbidden’ literature in Soviet Russia and Mikhail Bulgakov and Stalin’s relationship; the principles of a scholarly commentary on the novel The Master and Margarita; dividing Russian lit­erature after 1917 into émigré and Soviet. The questions and answers stress the necessity of not downplaying the reasons for the emergence of émigré literature, which stems from the Russian cultural tradition.

…Аn Encyclopedia of Anti-Comunism, a Wreath of The Most Vicious, The Most Abominable, The Dirtiest Betrayal…

The foundations of the current study are the documents from the archive of the Committee for disclosing the documents and announcing affiliation of Bulgarian citizens to the State Security and the intelligence services of the Bulgarian National Army. It discusses facts about the Criminal case №8 of the Sofia city court`s 1974 docket, so called Solzhenitsyn`s case. Analyzingdiscourse structure using lexicalcohesion of the various type of texts, such as prosecutor`s speech, the expertise assigned to three staff phi­losophers and the defense counsel’s pleadings, the author is trying the build a basic memory for events and facts tightly connected to the history of the Russian emigration in Bulgaria.

Female Objectification in the Cinematographicand Literary Genre Noir. A Model

This paper aims to present a theoretical model of the process of female objectification in film noir and attempt to apply the same (despite its singu­larity) to several works of fiction in two artistic fields, i.e. cinema and lit­erature. Based upon the theoretical framework of feminist film critic, Laura Mulvey, the model lists some of the factors contributing to the placement of “woman” at the other end of a binary opposition with “man” (the pro­tagonist) and goes on to explore two possible case scenarios for the process of female objectification in the noir genre. Making use of Freudian and La­canian psychoanalytic terms and concepts, the proposed model examines 1) the acts of active and narcissistic scopophilia as normal byproducts of the process of viewing a motion picture; as well as 2) the occurrence of a fetishistic or voyeuristic inclination as the result of an activated castration complex in the face of the protagonist, and hence – the viewer. In the final, analytical part of this study the model is put to the test against two works of literary fiction, namely Cornell Woolrich’s short story “It Had to Be Murder” and Edogawa Ranpo’s novel “Black Lizzard”, and their respective film renderings by directors Alfred Hitchcock and Fukasaku Kinji. Some preliminary conclusions are made with regard to the applicability of a sin­gular theoretical model to a number of artistic works of the same genre.