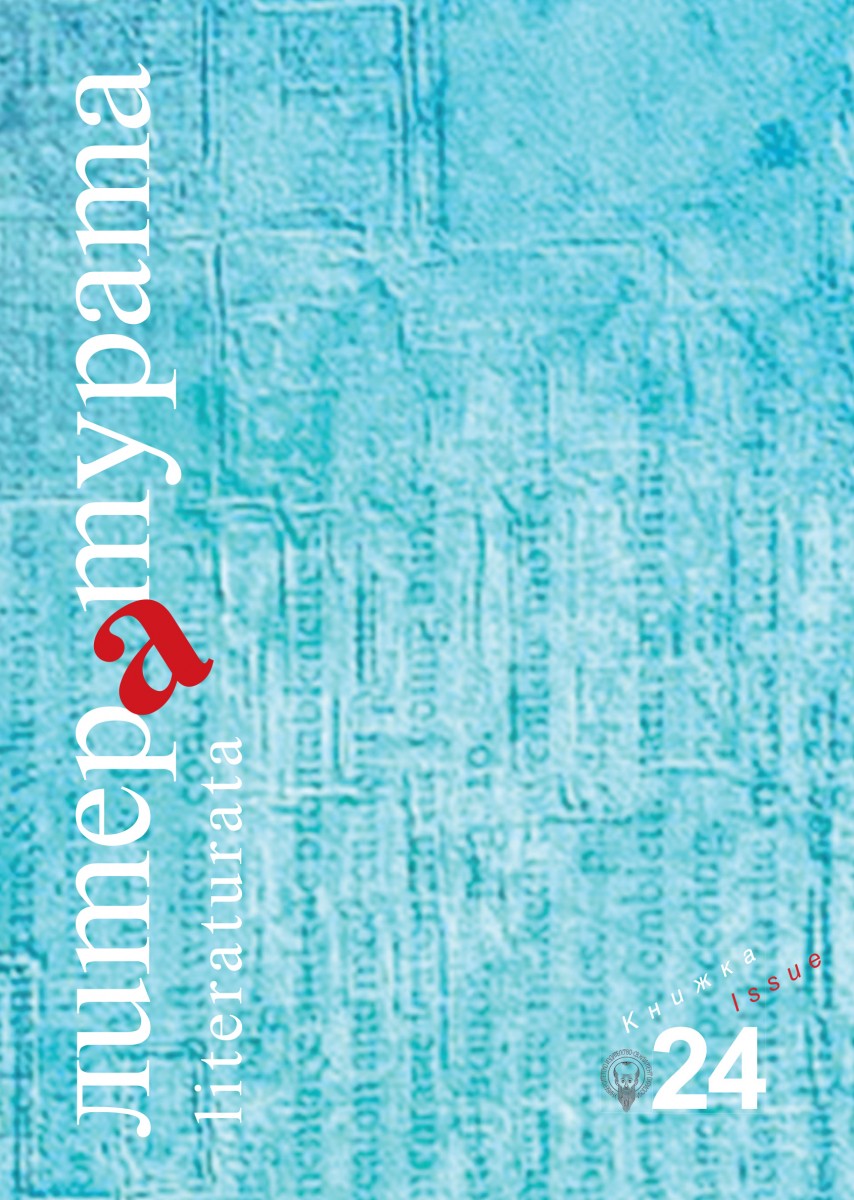 Todd Presner. Comparative Literature in the Age of Digital Humanities: On Possible Futures for a Discipline (Transl. from English by Milena Popova) / 11

Clemens Spahr. Literary History and the Problem of Periodization (Transl. from English by Ruzha Muskurova) / 70

César Domínguez. Comparative Literature, Literary Theory and the Anxiety of Omission: Spanish Contributions to the Debate (Transl. from English by Milena Popova) / 98

Nadezhda Alexandrova. Orientalism and the Mistakes of the Young Age: The Impact of Popular Literature on the Works of Ahmet Midhat Efendi and Vasil Drumev / 119

Fotiny Christakoudy-Konstantinidou. (An Attempt at) a Comparative Introduction to Modern Greek Poetry from the 1880–1930 Period / 140

Maurice N. Fadel. The Two Sources of the Crime Fiction / 172

Ivan Ivanov. Postmodernism in the Third Millennium – Beyond the “Cultural Logic of Late Capitalism” / 237

Dobromir Grigorov. Diction of Melancholy and Poetics of Literary Romanticism / 275

Christo Manolakev. A Model Edition of A. Pushkin’s Dramaturgy / 281

Requirements for Publications in the Journal “Literaturata” / 309

Comparative Literature in the Age of Digital Humanities: On Possible Futures for a Discipline

This article analyzes ponders on the possible futures for a Comparative

Literature with the advent of electronic literature and digital content in

general. The transformation of the literary is analysed vis-à-vis a set of

scholarly legitimacy, – which are not restricted to Comparative Literature

since they raise questions that have formed the methodological, disciplinary,

and institutional foundation of a wide – range of academic fi elds

in the Humanities, including history and art history, literary and cultural

studies, and the humanistic social sciences, such as anthropology, archaeology,

and information studies. The author argues that the Humanities of the

twenty-fi rst century has the potential to generate, legitimate, and disseminate

knowledge in radically new ways, on a scale never before realized,

involving technologies and communities that rarely (if ever) were engaged

in a global knowledge – creation enterprise. The purpose of this article is to

expanded world of comparative studies today. He shares an interest in these

problems with Gayatri although they have a different perspective on them.

complicit with the worst tendencies of global capitalism. He speaks about

the need for studying more languages, for collaborative work, and great

deal of pluralism in this field. Damrosch concludes that there is a dynamic

interplay in which world literature can help reframe comparative study. He

says that world literature is prior to the creation of most national literatures,

but in another sense, world literature exists only within a national space

for any given reader. So in this sense world literature is actually a function

of national systems and needs to be thought about that way. National

Literary History and the Problem of Periodization

The author claims that when we think historical events, literary texts, or

cultural phenomena, we usually relate them to schools and movements and

to a larger historical trajectory. He says that we can not simply relate literary

texts to specific historical context, not only because the literary text is

much more multifaceted than the picture of an era we tent to paint, but also

mediations. Our understanding of history itself is based on certain ideological

dispositions and always entails our individual narratives of history.

Clemens Spahr concludes that periodization is a contradictory operation

whereby we classify literary and cultural documents to their historical positions.

He poses the question of defining literary eras and their historical

borders, and the problem of imposing the concept of totality. The author

discusses the theoretical implications and practical consequences of understanding

literary texts as responses to particular social, cultural and institutional

formations. He also turns to a case study – literary production of the

Harlem Renaissance – that illustrates how problematic and productive is

the concept of periodization.

Comparative Literature, Literary Theory and the Anxiety of Omission: Spanish Contributions to the Debat

with literary theory in Spain. Special attention is paid to the benefits and

constraints of this alliance, which is tantamount to a discussion of the new

paradigm championed in the 1980s. The paucity of comparative literature’s

Orientalism and the Mistakes of Young Age: The Impact of Popular Literature on the Works of Ahmet Midhat Efendi and Vasil Drumev

This article is a comparative study on several levels. First, it examines the

theoretical interrelatedness between negotiable concepts such as orientalism,

world literature and comparativism. The study is not designed as an

ambitious endeavor of a fully theoretical nature; it rather stays closer to

Ottoman empire. On that second level, the article takes into consideration

of two authors from different nationalities in entailed. They are the

Vasil Drumev. After an overview of their biography and impact on Turkish

early years of literary activity. It seems that they have been familiar with

similar approaches of adapting orientalism and of overcoming the vogue

for Western popular literature in the 19th c.

The hunger for history of the entire 20th c. has unnoticedly become also a

hunger for identities. In this sense, the role of Greek poetry, created at the

turn and during the first decades of the 20th c., grows when except through

a coordinate system for defining the notion of identity. Through our literary

dictate literary production in the last decades of the 19th c. and in the first decades

of the 20th c., that is from the moment when Greek poetry became ready

in mastering the ideas of modernism during the 1920s, which subsequently

fame through the creations of the authors from the 1930s literary generation.

and the original Elin Pelin’s collection “Under the monastery vine”.

The original idea of this study was to compare the image of the clergy,

but a closer reading revealed other possible typological parallels between

the works. This is why, similarities will be sought in a broader sense – in

the existential questions posed, in the human measure of good and evil,

righteous and sinful, in the author's concepts of love and happiness, in the

search for a lesson through moral examples.

The Two Sources of the Crime Fiction

The article compares the two sources of crime fiction: English and French.

of the criminal literature: the problematization of the reader’s identification

and, hence, the aesthetic impact of the text. It turns out that the English

tradition follows more strictly this criterion, while the French one is more

particular Maurice Blanchot. Even though Auster is usually read in a postmodern

him as the famous writer he is. In addition, the text will present a brief correspondence

between Paul Auster and Maurice Blanchot.

the traditionally opposing “sisters” – literature and painting. This will happen

through the reading of three essays by Virginia Woolf in comparison

with the techniques of the Post-Impressionist art and movement, derived

by art critic and artist Roger Fry. The problem of subjective reality in both

discussed. The so called “life of imagination” would end up to be a crucial

factor in the thinking of both Virginia Woolf and Roger Fry.

The paper traces back how Marguerite Yourcenar’s method of writing, outlined

by the idea of multiformis, streams back to Virginia Woolf. Yourcenar’s

such as Marcel Proust or Thomas Mann. The comparison between

the women writers is based on Yourcenar’s essays on Wolf, written for

a specific occasion: Yourcenar’s translation in French of the novel “The

Waves”. Through the prism of this biographical detail, the essay explores

how Yourcenar adopts Woolf’s technique of “street haunting”. This technique

maintains the constant transfer between the inner and the outer space

“Memoirs of Hadrian”. Woolf’s method of inside-outside transfer is developed

only a reason for inner reflection.

The article describes the teleology of changing borders – a major argument

1980s, as it defines Timothy Garton Ash. The teleological point of view

demonstrates how the Central European self-reflections on the absence of

historical continuity, on the East, or the tragic fate of small nations construct

a process of transformation of facts into means. The relation between

The text challenges the debate about postmodernism in the new millennium

as a number of alternative concepts emerge trying to take its place. The

of transformation and mutation, which are coded in the concept of postpostmodernism,

introduced by Jeffrey Neallen in 2012 and verified

and summarized by Brian Mchel in 2015. The thesis of postmodern

postmodernism is opposed by the thesis of the overcoming dependence

of postmodernism on the cultural logic of late capitalism, leading to the

global spread of postmodern literature and postmodern poetics that are not

Nikola Furnadzhiev” aims for a psychoanalytic approach towards the book

described in DSM5 and their role in the experience of the lyrical subject.

Additionally, the article examines the ways in which the traumatic is

presented in “Spring wind” through specific characteristics that are typical

for literature dealing with trauma, and for which Ronald Granofsky speaks

in his book “The Trauma Novel”.