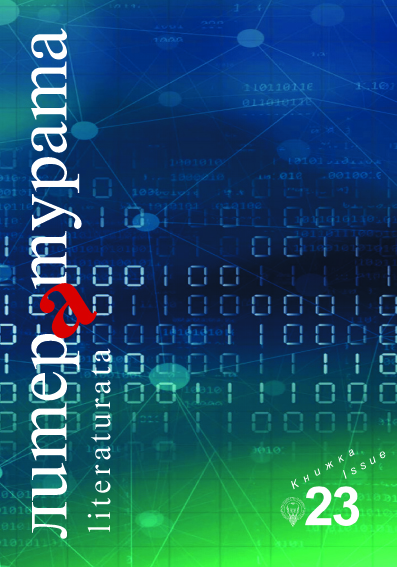 Tatyana Angelova . What Is Digital Competence and ShouldIt Be Taught? / 146

Yoana Sirakova. The Era of Digital Paideia: Learning through AlignedSource and Target Texts and Text Analysis / 166

Natalia Hristova. To Eliminate the Human – from Cyberneticsto Transhumanism / 182

Nikolay Genov . Between the Digital and the Virtual:The Peripheral Case / 208

Bilyana Todorova. On Some Humour Manifestations in InternetCommunication / 220

Irina Todorova. The Faces of Digital Humanity. Parallels between Journalism and Literature / 240

Vanya Dimitrova. Reception of Two of the Bulgarian Translations of “Alice’s Adventures in Wonderland” by Lewis Carroll – Linguistic Approach / 268

Miryana Yanakieva. The Never-Ending Dialogue of Nikola Georgiev with Literature / 285

Polina Penkova. Literature versus the Market / 302

Requirements for Publications in the Journal “Literaturata” / 323

What Is Digital Humanities and What’s It Doing in English Departments?

University of Maryland, US
The author states that digital humanities is more akin to a common methodological outlook than an investment in any one specific set of texts or even technologies. He says that we could attempt to refine this “outlook” quantitatively, using some of the very tools and techniques digital humanities has pioneered, or could choose to explore the question qualitatively, by examining sets of projects from self-identified digital humanities centers. M. Kirschenbaum insists that digital humanities is also a social undertaking. It harbors networks of people who have been working together, sharing research, arguing, competing, and collaborating for many years. He points out half a dozen reasons why English departments have historically been hospitable settings for this kind of work and emphasizes that digital humanities, which began as a term of consensus among a relatively small group of researchers, is now backed on a growing number of campuses by a level of funding, infrastructure, and administrative commitments that would have been unthinkable even a decade ago.
Keywords: digital humanities, scholarship, teaching, methodological, interdisciplinary, computing, networks

Foras Feasa Maynooth University, Ireland
“Digitale Geisteswissenschaften: Zentren und Peripherien”. This paper
explores a history of humanities computing over the past decade as embodied
in or represented by A Companion to Digital Humanities (first published
in 2004), methodologically, theoretically, and in terms of community
practice. It explores digital humanities as an emerging discipline through
changes in technology, as well as through evolving conceptions of the field,
particularly through the lens of literary studies and new media. The article
also explores how the field’s major conference Digital Humanities, but
previously titled the Joint International Conference of the Association for
Computers and the Humanities and the Association for Literary and Linguistic
Computing (ACH/ALLC), reflects these changes, through not only
the themes presented in conference papers, but in the change of the title of
the conference itself.
Keywords: history of Digital Humanities, companion to Digital Humanities,
text encoding, interdisciplinary, new media

International University Bremen, Germany
Whether can computer analysis be perceived as a healing tool against the limitations of traditional analysis, and how does it help us to go deep in some of the problems of stylistics and literary theory; what type of model studies and methods does it offer; what does it say about the construction of the text and how does all this affect the analysis and interpretation procedures?
Keywords: computer analysis, stylistics, methodology, literary theory, interpretation

University of British Columbia, Canada
According to Turing, there is a basic link between language and robots. Instructions
are probably entered into a specific mediator, but they are purely
theoretical and rather exist in the world of codes than in any concrete form.
This world of codes is the place where humans and robots inevitably meet
each other. There humans are robots to the highest degree, and robots are to
the highest degree humans. Based on this formula, the text examines connections
between linguistics and robotic poetics.
Keywords: robot, human, poetics, linguistics, art

The article discusses the manifestoes of digital humanities in their chronological
order, and focuses on their ideas, style characteristics, similarities to
the avant-garde manifestos of the early 20th century. The analysis reviews
positions that are critical to digital humanities and attempts to identify its
place in the range of contemporary academic disciplines.
Keywords: digital humanities, manifesto, avant-garde, digital technologies

What Is Digital Competence and Should It Be Taught?
Tatyana Angelova
Sofia University “St. Kliment Ohridski”, Bulgaria

The topic of the article is the concept of digital competence, which is described
through criteria and indicators presented by the Framework for
Understanding and Development of Digital Competence in Europe. A
functional solution to the problem of smart use of information technologies
is sought. We defend the understanding that the education systems in
secondary schools and universities have to be changed and reformed according
to the paradigm set by new technologies. The digital competence
self-assessment matrix is examined to answer the question if this type of
competence should be taught.
Keywords: digital competence

The Era of Digital Paideia: Learning through Aligned Source and Target Texts and Text Analysis

Yoana Sirakova
Sofia University “St. Kliment Ohridski”, Bulgaria
Bilingual corpora in language education and research offer a unique instrument
for discovering languages logical sets and translation techniques
both in the original and the target language systems. They provide today’s
learners with a means for individual exploration and acquiring of linguistic
knowledge with no human mediators like e.g. teachers. That is one of
the goals of building a parallel bilingual corpus of Bulgarian translations
of Roman authors and texts as a depiction of a peculiar local reception of
antiquity and as a means for enhancing linguistic and literary analyses. The
paper confines to the account of few case studies, provided by aligned bilingual
corpora and computer-assisted analyses, and intertwines with some
issues about the dynamic and changing conditions and challenges in education
and research in present days.
Keywords: translation, bilingual corpora, alignment, Digital Humanities, Latin

To Eliminate the Human – from Cybernetics to Transhumanism

Natalia Hristova
Sofia University “St. Kliment Ohridski”, Bulgaria
In his book The Obsolescence of Humankind (1956), Gunter Anders speaks
of the Promethean shame of the modern man that he is not at the height of
the things he invented himself. At the heart of this shame stands the humiliating
feeling that unlike a machine, the human being is an accidental,
incomplete result of a blind, unpredictable, incalculable and uncontrollable
process of conception and birth, that unlike machines, he is born, not produced.
Desiring to imitate the technical tools, the modern man sets himself
ever higher goals, becoming subject to a specific engineering whose ultimate
goal is to transform tne man into a machine. The article еxamines
this process of eliminating the human from the cybernetics through the
algorithmic governmentality to the biotechnical enhancement.
Keywords: сybernetics, algorithmic governmentality, drons, transhumanism,
moral bioenhancement

Between the Digital and the Virtual: The Peripheral Case

Nikolay Genov
Sofia University “St. Kliment Ohridski”, Bulgaria
The paper explores the notion of virtuality in William Gibson’s latest sci-fi
novel “The Peripheral” in terms of its relation to the concepts of the digital
and the real. The body is thus used as a medium the purpose of which is to
negotiate their possible theoretical differences. The article also explores the
pervasive role of the police authority in the novel’s universum considering
it a part of the established dynamic.
Keywords: virtuality, digital, real, peripheral

On Some Humour Manifestations in Internet Communication

Bilyana Todorova
South West University “Neofit Rilski”, Bulgaria
The aim of the paper is to present some humourous texts, which are shared
in Facebook, the most widespread social media in Bulgaria at the moment.
These funny messages are often re-posted by some users both to make
them more popular and to amuse the others.
The investigation shows that the humour production in the excerpted corpus
is mostly based on the polysemy and homonymy. The play between
more than one meanings of a word, the ambiguity between some possible
interpretations is a source of mirth. As the laugh has the positive effect on
people, one may assume that the consequence of such a sharing is similar.
Keywords: humour, internet communication, polysemy, homonymy, language
play

The Faces of Digital Humanity. Parallels between Journalism and Literature

The article examines the issue of the dissemination of the contemporary
act of digital humanity. It is topical and significant with a view to its growing
popularity among recipient. The focus is direction on connection between
media and literature as fundamental and key for humanity. Examines
incidence of the message in contemporary media and literature environment.
This is due to the wide accessibility and the means of its distribution
through various websites, new media, social network development (Facebook).
Vlogging and multimedia platforms (YouTube) play an increasingly
important role in this process.
Some of the conclusions are:
1) The storytelling will be find in many direction – media, art, literature
and etc.;
2) The literature will always be modern in various forms аs well as in its
audio-visual combination;
3) Humanity will be have bigger role in modern society.
Keywords: new journalism, literature, storytelling, virtual environment

Digital Humanities on Glass Media. Image Transfer to Glass in Architecture and Design

The glass age is flourishing in the architecture industry. The role of glass has evolved and strengthened over the years to make it one of the most important building materials for humanity. The emergence of different glass processing techniques is expanding the capabilities and the application of the material in the field of architecture and design in the context of digital humanities. Cultural heritage finds its application in modern times by being transmitted through digitalisation on glass media. Permanent works of art, symbols of antiquity and classical texts are displayed on glass by the method of image transfer. The transparent building material has virtually unlimited aesthetic capabilities, combined with exceptional features. In architecture, serigraphic glass in the context of digital humanities is used for windows and showcases, facade coatings, individual architectural details. In the interior, photo-transmitted image glass is used for partitions, glass floors, stairs, roof glazing and glass bricks. The natural simplistic visual access to classical works by means of digital instruments determines their immediate application as social and psychological keys for communication in the field of design and architecture.
Keywords: glass age, glass architecture, glass design, digitalization on glass media, serigraphic glass, interior design

Sofia University “St. Kliment Ohridski”, Bulgaria
This text has a chapter about “The boot in the Bulgarian literary fashion” –
a research of Daria Karapetkova in which she gives models of criticising
and analising Italian literature’s translations into Bulgarian, made from
1878 to 1989. She describes how they were accepted in Bulgaria. The main
subject of the text is in the chapter, where two of Bulgarian translations
of “Alice’s adventures in Wonderland” are presented. Some passages are
selected and put together, and linguistic approaches in them are compared.
The reception of two translations is commented on the base of the previously
mentioned models.
Keywords: Dariya Karapetkova, “The Boot in the Bulgarian Literary Fashion”,
Theory and Practice of Translation, Lewis Carroll, “Alice’s Adventures
in Wonderland”, reception, children, adults, Bulgarian translations/
translators, Lazar Goldman, Pavlina Chohadzhieva, linguistic approaches